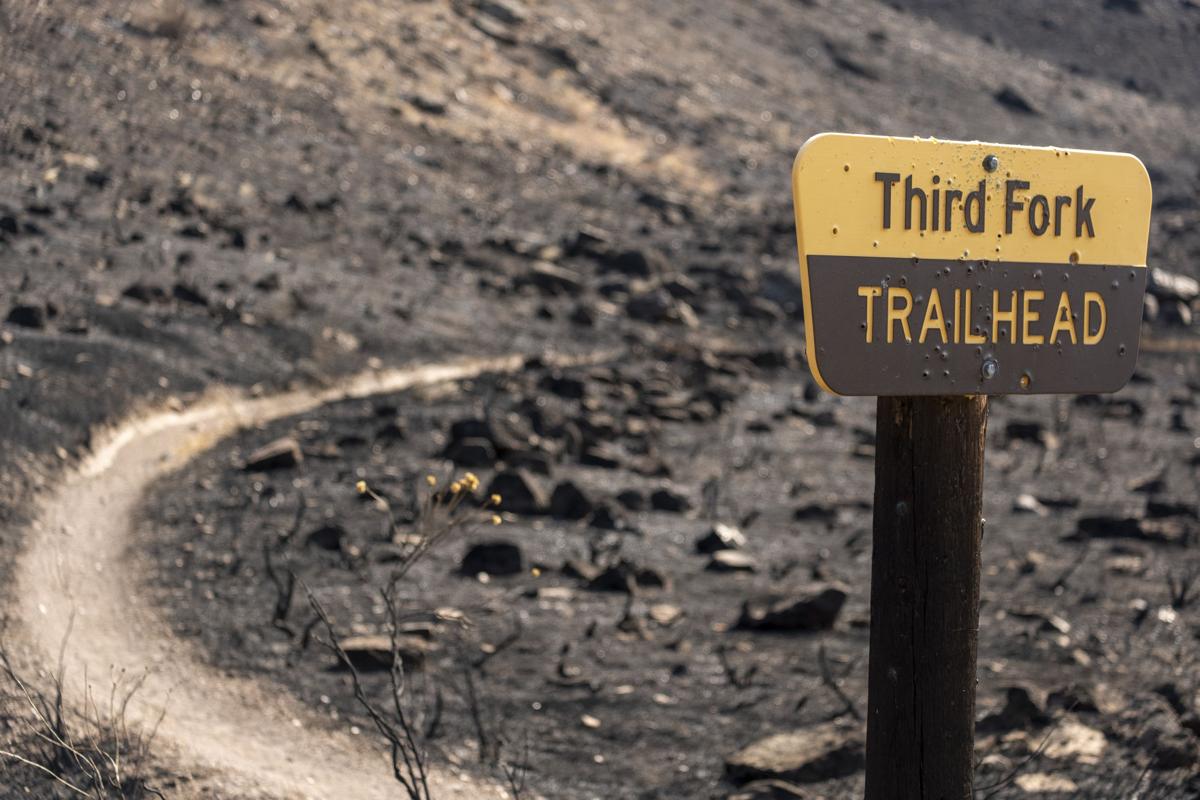 The Third Fork Trailhead sign, seen Oct. 1, still stands after the Badger Fire moved through the South Hills, burning more than 90,000 acres of forest, sagebrush and grass in the hills south of Hansen. 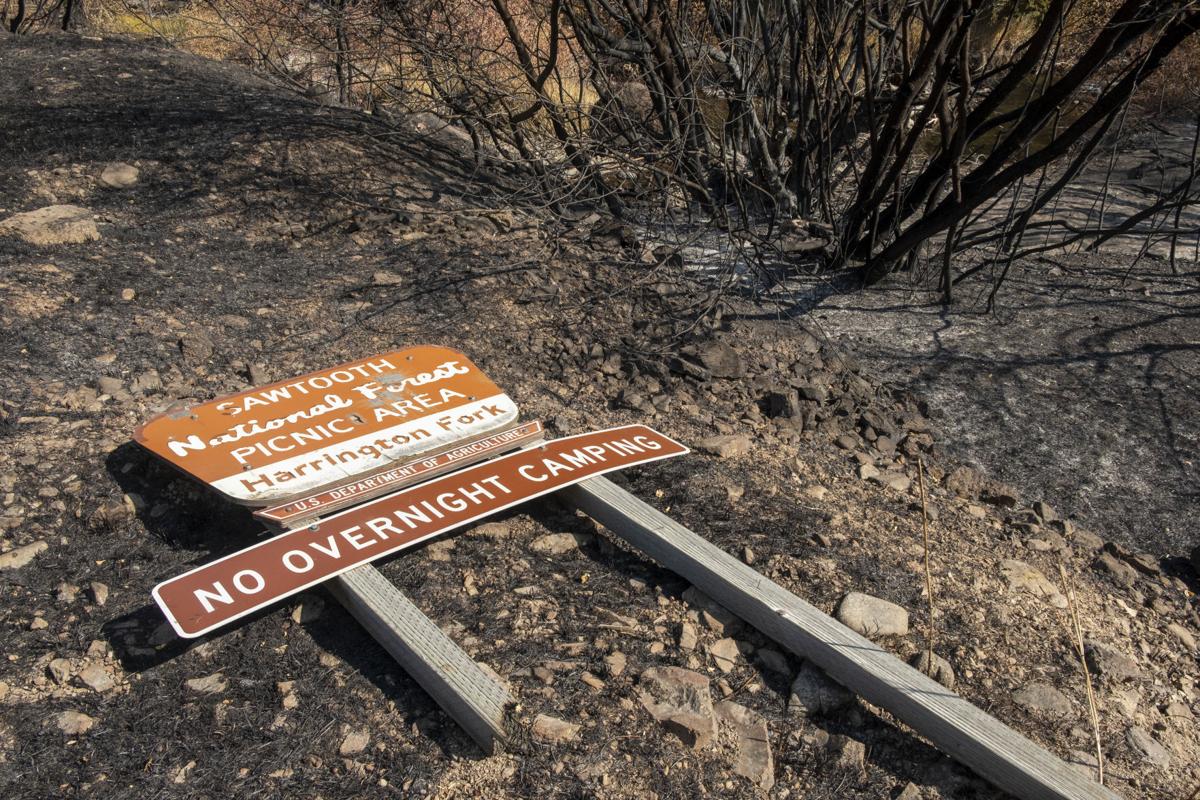 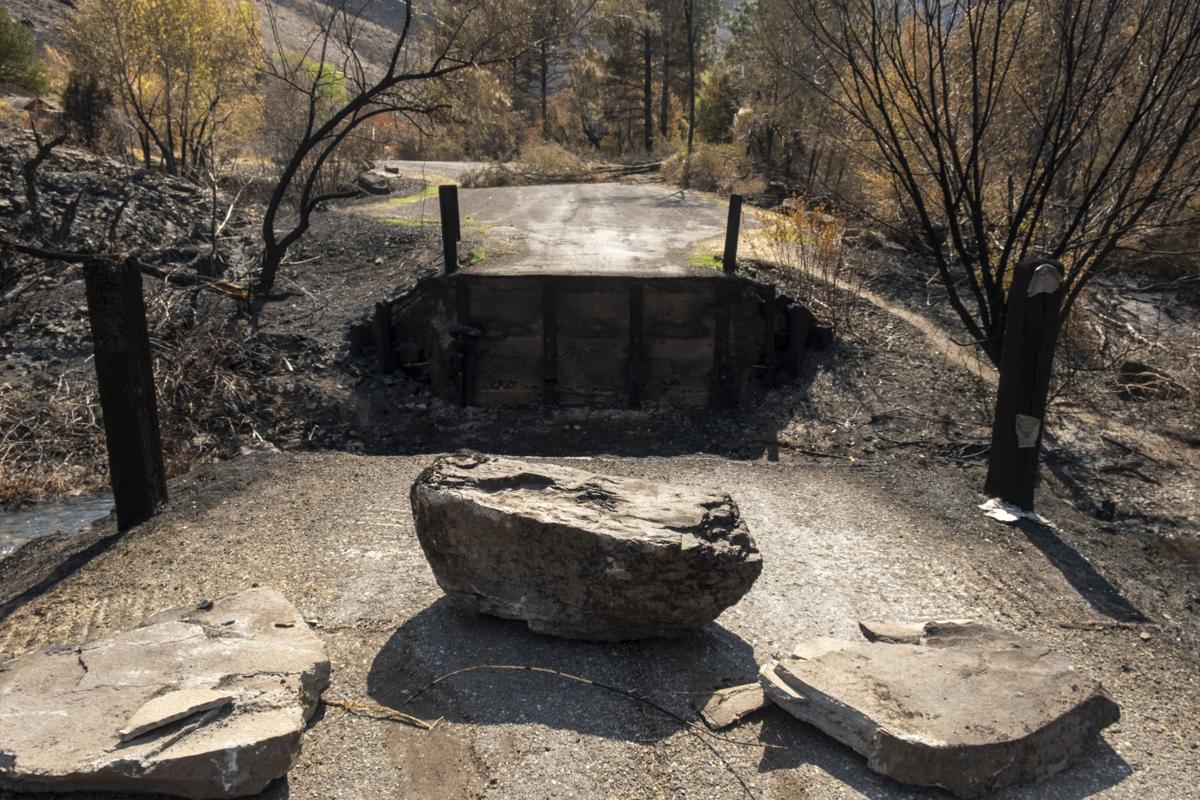 The bridge to the Harrington Fork Trailhead, seen Oct. 1, burned during the Badger Fire in Rock Creek Canyon, south of Hansen 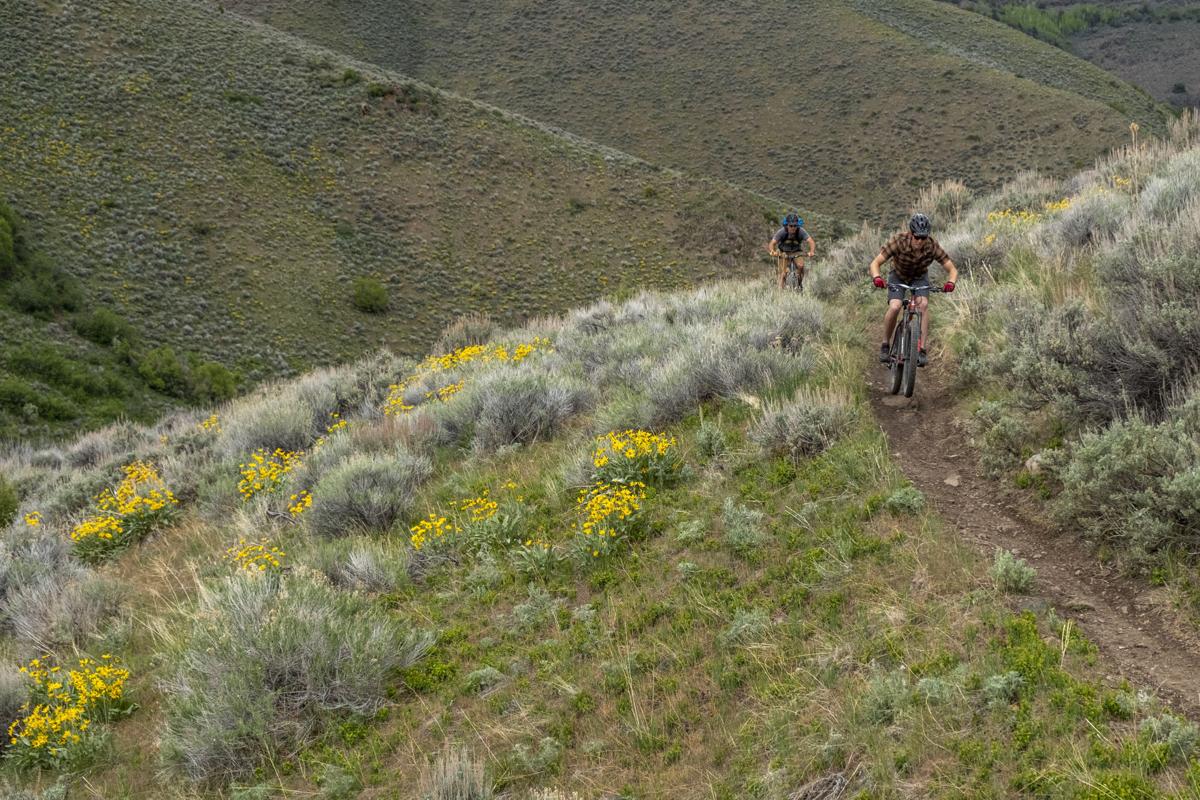 Michael Young (front) and John Twiss begin a short descent May 15 on their mountain bikes on the Third Fork Trail in Rock Creek Canyon. Arrowleaf balsamroot blooms on the hillsides in spring and early summer adding bright yellow colors to the countryside. 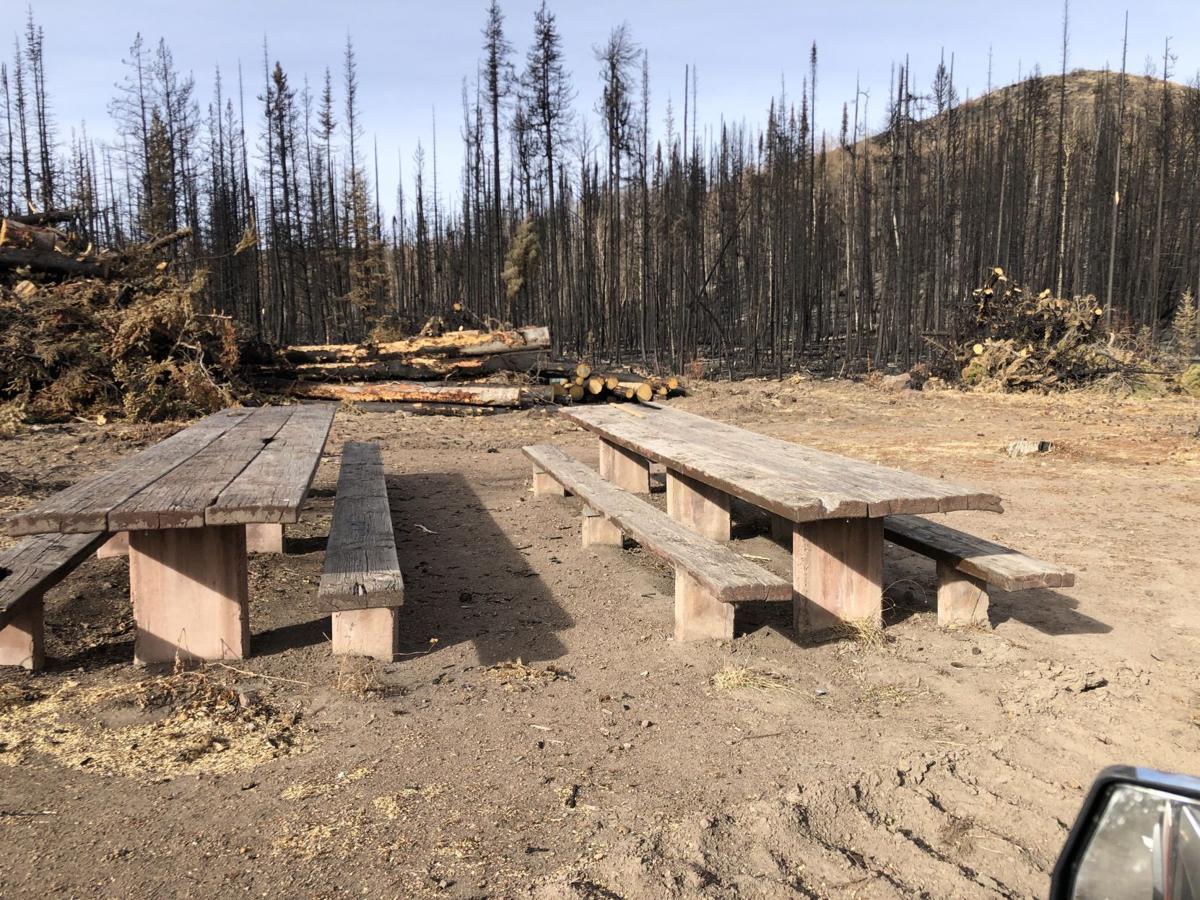 Picnic benches remained intact at the Father and Son Campground on Oct. 17 but other damage from the Badger Fire crept very close to the benches and affected other parts of the campground. 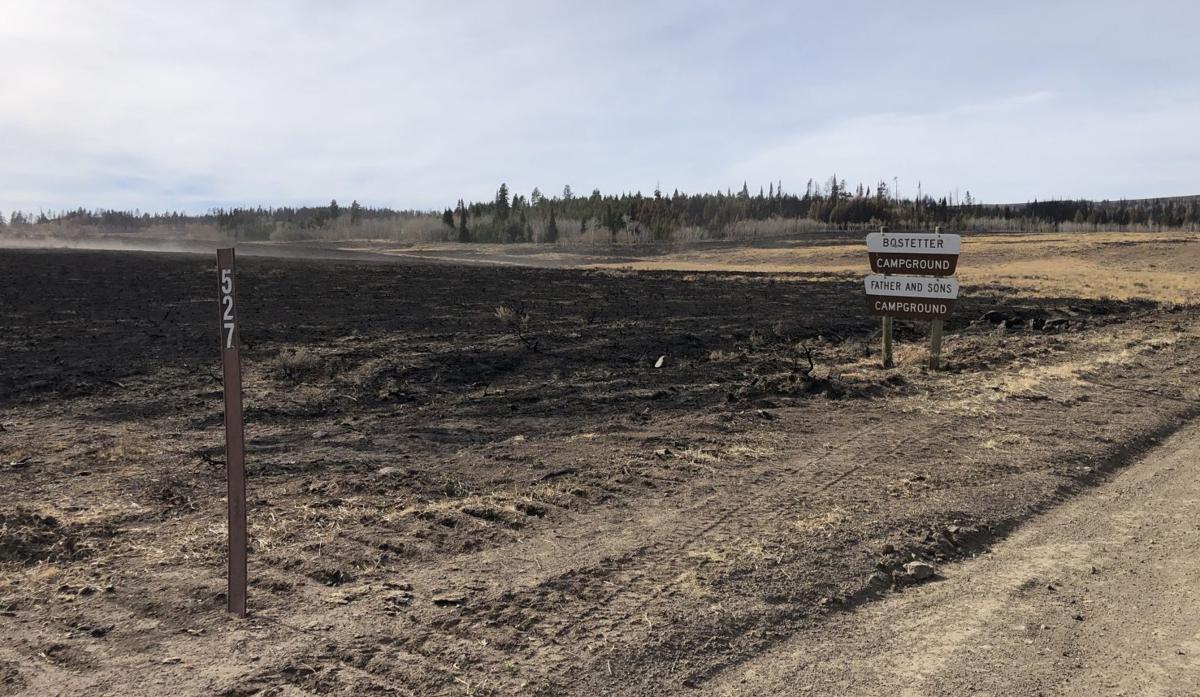 Grass burned by the Badger Fire along FS 527 near Bostetter Campground is seen Oct. 17. The fire started Sept 12 and burned more than 90,000 acres in the South Hills. 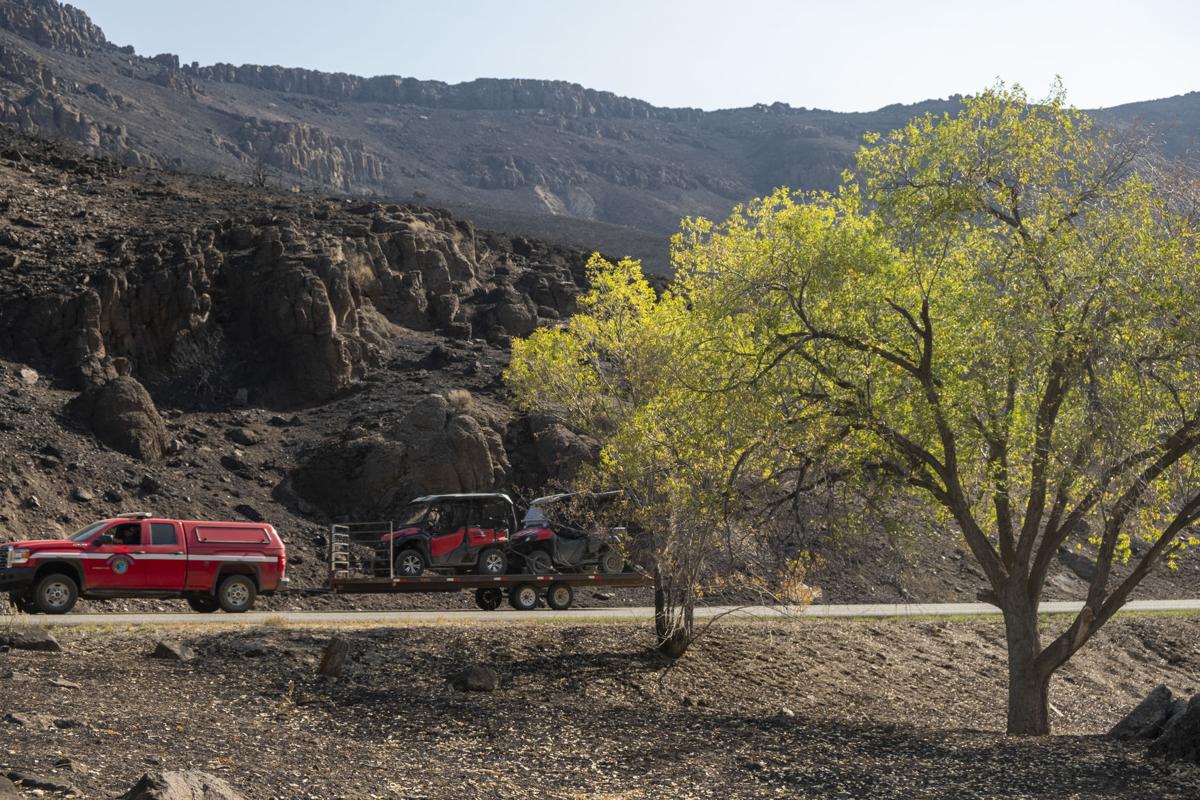 A firefighting truck pulling a trailer with ATVs descends Rock Creek Road among burned trees, grasses and sagebrush from the Badger Fire in the South Hills Oct. 1 south of Hansen.

Weeks have elapsed since the last embers of the Badger Fire — which turned decades-old forest growth to ash — were extinguished.

Recent storms have washed small amounts of soot and sand down streams, but the smell of burnt trees and grasses still lingers within the canyon walls.

This story is the fifth in a multi-part series on the Badger Fire and its eﬀects on South Hills. Read the previous parts at go.magicvalley.com/badgerfire.

Next week’s story explores the science of increasingly large wildfires, how they’re changing the West and how the Badger Fire fits into the new normal for wildfire.

Among the noticeable changes in the South Hills is the noise — or the lack thereof.

The familiar sounds of fall recreation are missing as many trails and roads remain closed.

Gone are the bicycle hubs buzzing on descents of Third Fork, the “BRAPP!” from motorbikes and ATVs among the aspen groves near Bostetter Campground, and the gentle claps of horse hooves from trail riders ascending Badger Mountain.

The forest is nearly silent.

And it’s not clear when recreation will return to the South Hills or what it will look like when it does.

But when it does, the people who use the area say they hope they’ll be involved in making improvements.

Where will people go?

Lots of people from Idaho go to Moab, in southern Utah to recreate. But this spring, Utah shut down because of COVID-19. The result: More people stayed close to home.

“They shut down in the spring so people couldn’t go down to Moab and so you ended up with a big influx of people that were riding the deserts in southwestern Idaho,” Magic Valley ATV Riders club member Kent Oliver said. “That caused a lot of problems because of the sheer, enormous numbers of people who were wanting to get out and ride who (normally) would spend weeks down at Moab.”

Officials worry the Badger Fire may cause some similar problems in the South Hills. Damaged trails and campgrounds remain closed, so people could just end up going to nearby areas and change those areas.

“One of the concerns, because of the fire, is that it is going to open up terrain that could potentially see trails develop,” Idaho Department of Fish and Game spokesman Terry Thompson said. “There is concern about impacts of ATVs, motorcycles, and that on wintering big game. The fire potentially could have opened up more ground for people to recreate on.”

Oliver said some places could get overloaded with people camping where they are not supposed to, especially in the upper elevations where there is less damage from the fire.

“You might want to avoid the South Hills for the next year,” mountain biker Mike McAuley said. “Come spring, the west side, both legal and illegal users will use it and swarm it.”

The South Hills is a popular hunting area, a draw-hunt zone that houses mule deer, elk, moose and pronghorn.

Damage to trails, campgrounds, roads and hunting areas varies across the 90,000 acres burned in September by the Badger Fire.

Traveling up along major drainage canyons like Rock Creek and Trapper Creek reveals burned out tractors, campgrounds and bridges, but the damage becomes more patchy and mosaic-like with less damage as one reaches higher elevations.

“The fire up high burned very patchily, some-what of a mosaic…,” Thompson said, “…so in the long term the fire up high is going to benefit wildlife, but down in the low country where it burned really hot, it’s going to take years and years to recover back into conditions prefire. We anticipate that the fire is going to impact deer just because of the loss of winter range.”

Thompson also said the Dry Creek area burned badly, which will force the mule deer — and the hunters seeking them — as they move down from higher elevations to winter range.

The agency did have a number of people rain check their hunting tags because of the fire, yet it doesn’t know what that number is due to a switch in the license vendor on Nov. 1. Licensing teams were focused on getting ready for the system conversion for several weeks during the switch, resulting in data trickling in or not yet reported.

Over the next year, Fish and Game will be setting big game season numbers and will hold public meetings in that process. “That is when probably we will start hearing concerns, or comments about ATV use and we will also be listening to hunters that have been out in the field this year and what they’re seeing.”

In the meantime, most of the South Hills is back open for hunters.

Your membership makes our reporting possible.

“For hunting, a hunter can walk into the fire area and go hunting as long as they are not on those (closed) trails,” National Forest Service Public Affairs Officer Julie Thomas said. “There isn’t a closure anymore on the fire area but there is a closure in the campgrounds and canyon that were burned, plus a closure of some ATV trails.”

The most current revision of all closures of trails and roads is on the forest service website, she said.

The Magic Valley ATV Riders’ Oliver has been around motorized outdoor recreation vehicles most of his life. In the 1980s when ATVs became more popular, one was purchased for his family’s farm and they would take it into the mountains to ride. As time ticked on, his passion for riding ATVs grew, and the trail systems of the South Hills grew as well.

Eventually, as he aged, his wife didn’t want to ride on her own motorcycle as much and got into ATVs, placing the two of them onto one machine, “an evolution of the sport,” Oliver said.

The Badger Fire forced them and other ATV Riders to leave their favorite trails much earlier in the year than normal.

“It put us into an earlier seasonal closure than what we are normally accustomed to,” Oliver said. “It was kind of in the fall season when things were winding down, the temperatures were kind of nice to get out and get riding a lot of the good 50-inch trails, (which) just happen to be within that closure area. That hampered us, and for people to get up there and just ride the network that is up there.”

Closures for hunting and regular seasonal closures as winter approaches has shut down the riders even more.

In conjunction with the Idaho Department of Parks and Recreation and the Forest Service, Magic Valley ATV Riders volunteers every spring on trails in order to take care of issues like downed trees, slough removal and spring run-off damage in an effort to help maintain areas for safe riding.

Not only do they try to remove debris on the trail, but they target debris that can encroach on the trail, such as downed trees lying parallel but uphill from the trail that can roll down from a combination of snow sloughs, ground moisture and time.

The club has three certified Forest Service buckers working when cleanup efforts occur. Oliver wants to increase that number to six in order to help spread out resources for future cleanups.

“The thing about the forest service is they do not have a fund that will just move in and repair the stuff,” Oliver said. “They have to get funding, apply for funding to get it.”

Oliver said unburnt overgrowth on trails can cause problems. As grasses grow, people have a tendency to start moving away from the bushes and start riding on the outside edges of trails. This breaks apart the trail, narrowing it, and encourages others to move to the same side since nobody wants to walk next to the brush. This creates an “off-camber effect,” he said, and it becomes hazardous to users, especially when spring runoff collects on the lower section of the track or trail.

That’s the type of damage the group hopes to help avoid with its work.

But the Badger Fire may be a sign that more work needs done.

“Our first thing was, we were concerned why this fire went as bad as it did and for so long,” Oliver said. “We understood this was a bad fire season and resources were not available. It was like the perfect storm. We kind of questioned whether it has been managed correctly, to mitigate out dead-standing timber and stuff. As user groups, that is something we are always concerned with.”

In the lower elevations of the burn area, single-track users like hikers and mountain bikers felt the effects of severely burned areas earlier than some motorized riders in lighter burned areas.

Still, the fire could have been worse.

“I would have considered moving away from Twin Falls if the fire had burned the west side (of the South Hills),” mountain biker McAuley said. “(I would) greatly change my riding habits to going up north.”

McAuley has ridden in the South Hills for close to 30 years. Now an avid electronic-biker, he has the capacity to ride more than he used to, which has also changed his riding over that time frame.

Witnessing multiple fires in the area, how those changed the landscape, and having sat through years of closures before being able to enjoy riding the trails again, McAuley has experienced a lot from the South Hills history.

“Losing the east side is not as bad as losing the west side,” he said. “But from a mountain biker standpoint, it’s going to take some time. Let some stuff settle first then (we’ll be able) to get in there after winter and see what it looks like. It might take 100 years to grow back in some pockets, certainly longer than our lifetimes or even our kids, but let some stuff settle first.”

McAuley and Oliver both recounted stories from the Cave Canyon Fire in 2012, which engulfed roughly 90,000 acres (nearly identical in size to the Badger Fire) in the Big Cottonwood Wildlife Management Area and northeast corner of the South Hills. The Cave Canyon Fire closed off trails for years as well, impacting trail use similar to what is happening in 2020.

They hope this fire will spur improvements to the area and prompt the Forest Service and user groups to work together.

“Everybody wants to come back in and have potential opportunities to expand and improve the trails,” McAuley said, “but if no expansion can happen, improvements should happen for sure. We can rebuild it better and in a more sustainable way.”