LeBron James looks to be making the best of things during his unwanted time off.

The NBA superstar, 37, took to Instagram on Thursday with a montage of clips of a vacation he’s on in the Maldives with friends and family.

‘Hey Life…… I simply just wanna say, THANK YOU!!’ James captioned the video clip, along with emojis of prayer hands and a king’s crown.

The latest: LeBron James, 37, took to Instagram on Thursday with a montage of clips of a vacation he’s on in the Maldives with family and friends

He appeared to stay at the Four Seasons Resort Maldives at Landaa Giraavaru, an opulent holiday spot in the Indian Ocean archipelago, populated with waterfront villas, beach villas and three-bedroom water suites.

The Los Angeles Lakers star documented the fun times in which he enjoyed a bike ride, walk on the ocean, stunning sunsets, boat rides and extravagant dinners.

The basketball icon set the highlight reel of the luxury vacation to the tune of TO THE MOON by Jnr Choi and Sam Tompkins.

James was accompanied on the luxury vacation by his wife of eight years, Savannah, 35; confidante Ernie Ramos and his wife; DJ Bamboozle; and Fara Leff, COO of Klutch Sports, among others, TMZ reported. 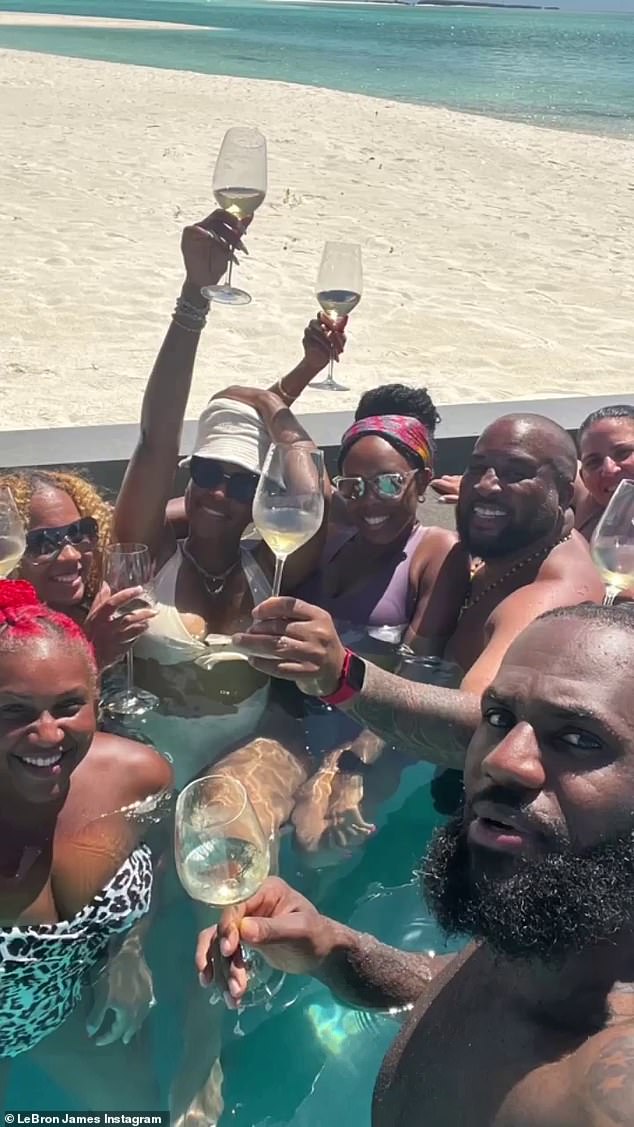 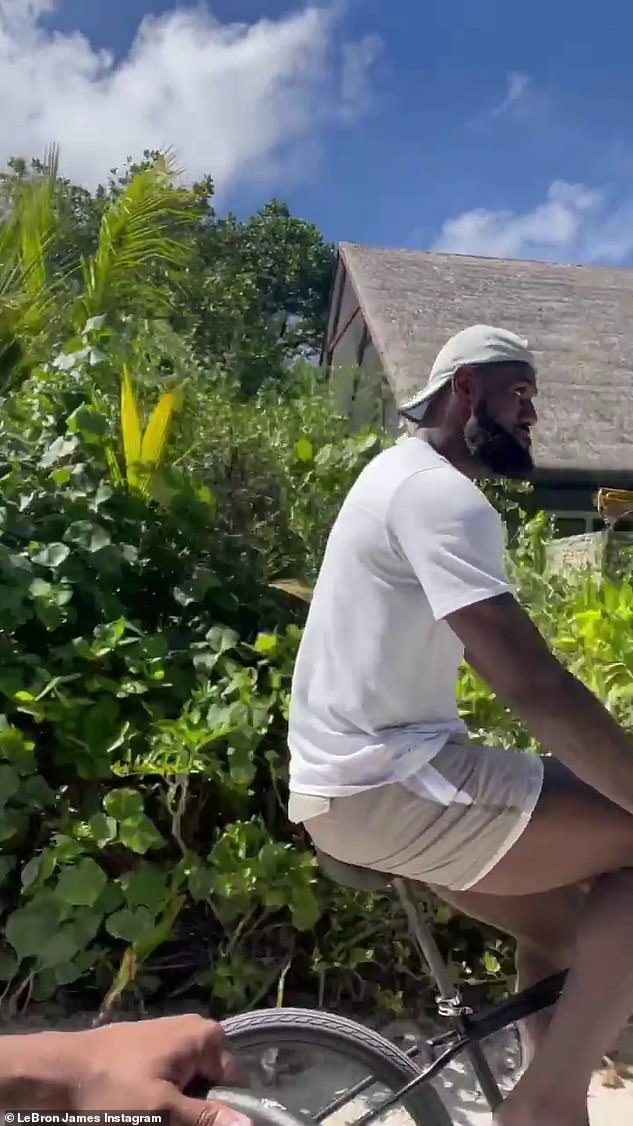 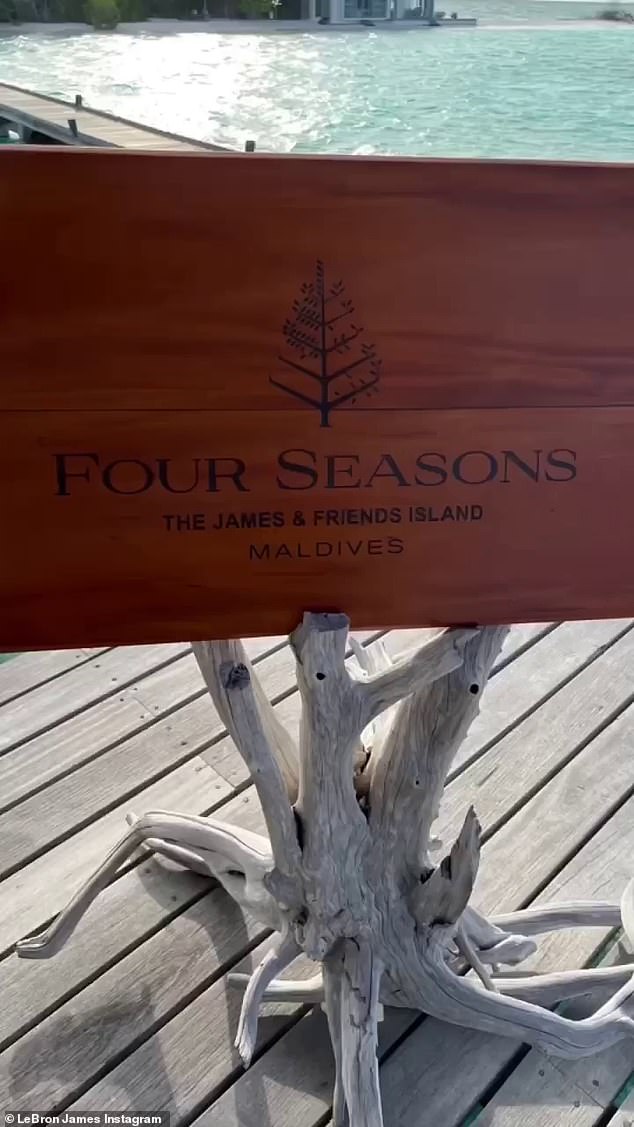 He appeared to stay at the Four Seasons Resort Maldives at Landaa Giraavaru, an opulent holiday spot in the Indian Ocean archipelago 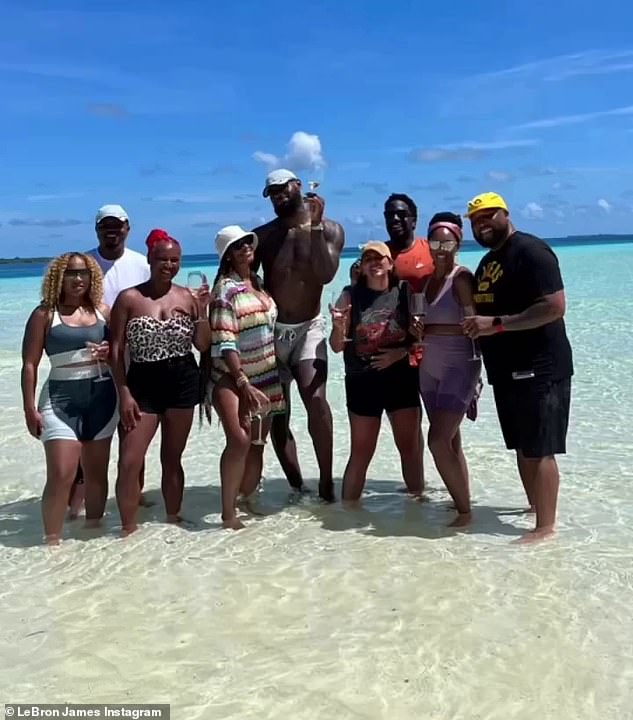 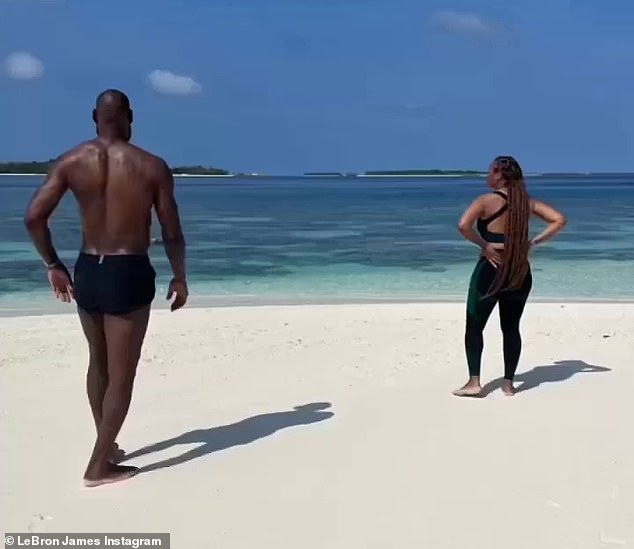 Savannah – who is mother to sons Lebron ‘Bronny’ Jr., 17, and Bryce, 14, and daughter Zhuri, seven, with James – also shared a clip of the well-heeled retreat.

She captioned the clip: ‘The Maldives owes me nothing!! A small snapshot of a trip for the books!! #BaaAtollMaldives.’

The four-time league MVP last week took to Twitter to vent about missing the playoffs for only the fourth time in his 18-year career, which has also included stints on the Cleveland Cavaliers and Miami Heat.

‘I can/will NOT miss the post season again for my career!’ he said in a tweet Friday. ‘This s*** HURT. Ok back to watching these games.’ 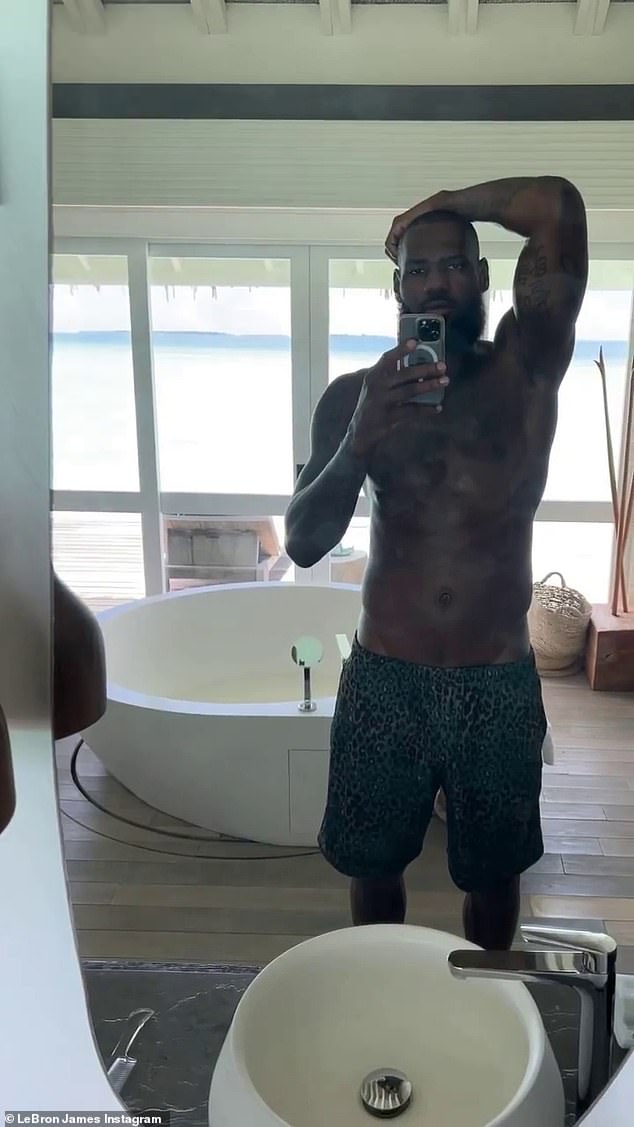 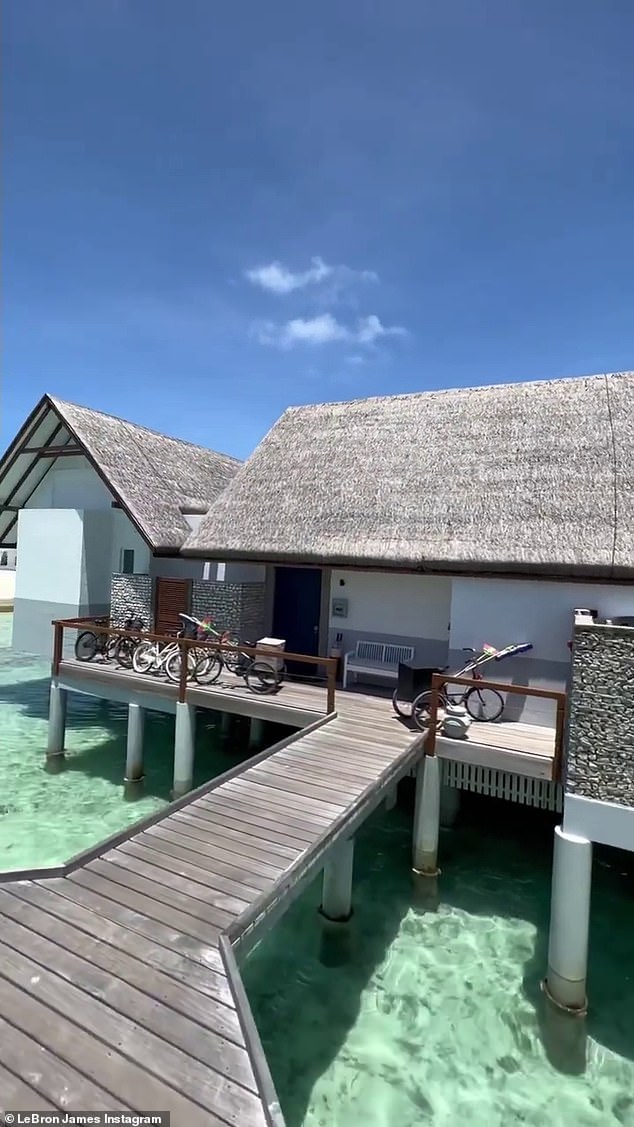 The resort is populated with waterfront villas, beach villas and three-bedroom water suites 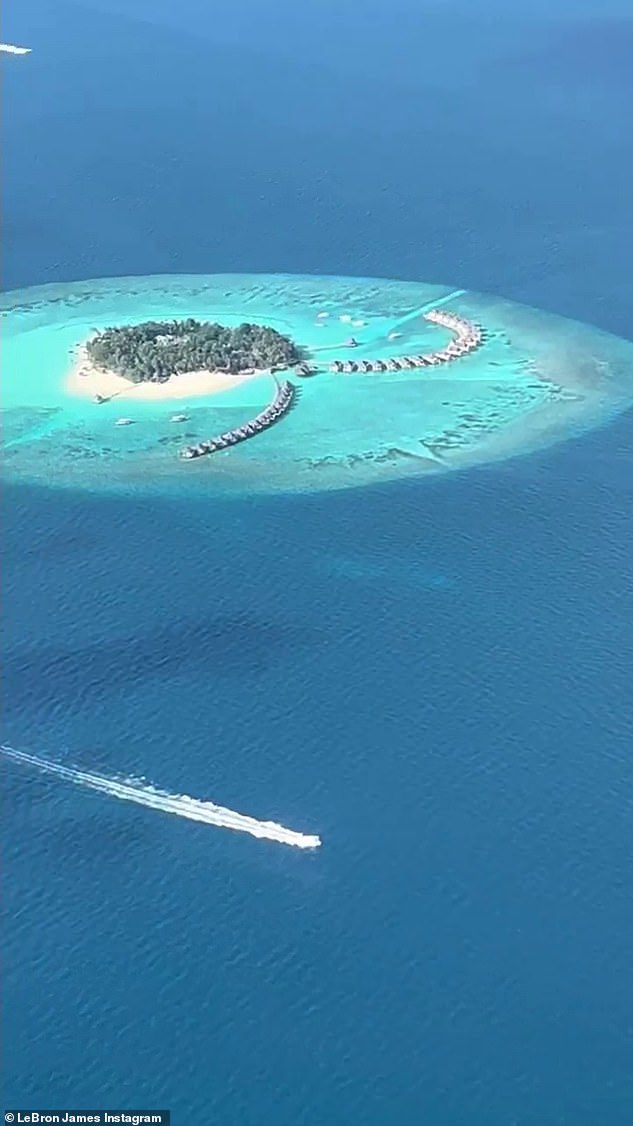 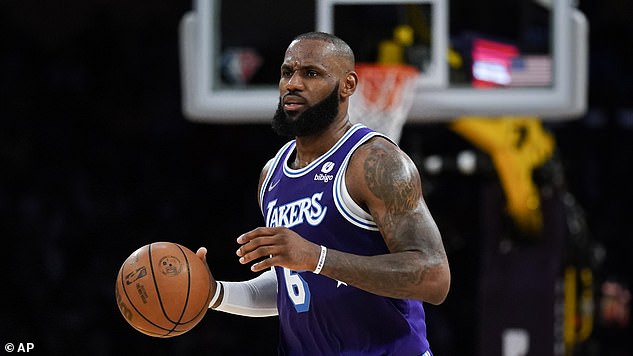 Despite his team’s struggles and lingering injuries, James made an impact when on the court this past season, averaging 30.3 points per game, along with 8.2 rebounds and 6.2 assists

James and the Lakers missed the playoffs after an underwhelming 33-49 season, in which James was limited to 56 games with various injuries.

Amid a pileup of losses in the season’s second half, James told reporters last month, ‘I hate losing. I feel like poop right now.’

Despite the team struggles and injuries, James made an impact when on the court, averaging 30.3 points per game, along with 8.2 rebounds and 6.2 assists.

He achieved another milestone in the down season in passing Karl Malone to become the league’s second-highest scorer in history with 37,062 career points. Lakers legend Kareem Abdul-Jabbar remains in the top spot with 38,387 points.

James is slated to return to the Lakers for the last year of his contract in the 2022-2023 season, with an annual salary of around $44.5 million.

Fashion
We use cookies on our website to give you the most relevant experience by remembering your preferences and repeat visits. By clicking “Accept All”, you consent to the use of ALL the cookies. However, you may visit "Cookie Settings" to provide a controlled consent.
Cookie SettingsAccept All
Manage consent